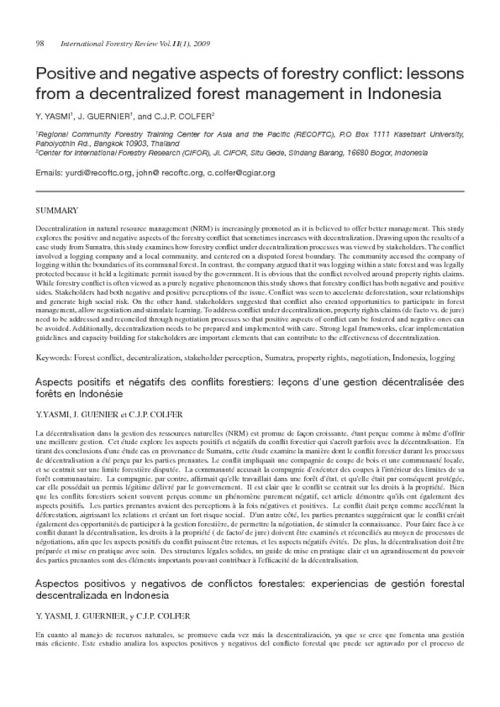 Decentralization in natural resource management (NRM) is increasingly promoted as it is believed to offer better management. This study explores the positive and negative aspects of the forestry conflict that sometimes increases with decentralization. Drawing upon the results of a case study from Sumatra, this study examines how forestry conflict under decentralization processes was viewed by stakeholders. The conflict involved a logging company and a local community, and centered on a disputed forest boundary. The community accused the company of logging within the boundaries of its communal forest. In contrast, the company argued that it was logging within a state forest and was legally protected because it held a legitimate permit issued by the government. It is obvious that the conflict revolved around property rights claims. While forestry conflict is often viewed as a purely negative phenomenon this study shows that forestry conflict has both negative and positive sides. Stakeholders had both negative and positive perceptions of the issue. Conflict was seen to accelerate deforestation, sour relationships and generate high social risk. On the other hand, stakeholders suggested that conflict also created opportunities to participate in forest management, allow negotiation and stimulate learning. To address conflict under decentralization, property rights claims (de facto vs. de jure) need to be addressed and reconciled through negotiation processes so that positive aspects of conflict can be fostered and negative ones can be avoided. Additionally, decentralization needs to be prepared and implemented with care. Strong legal frameworks, clear implementation guidelines and capacity building for stakeholders are important elements that can contribute to the effectiveness of decentralization.