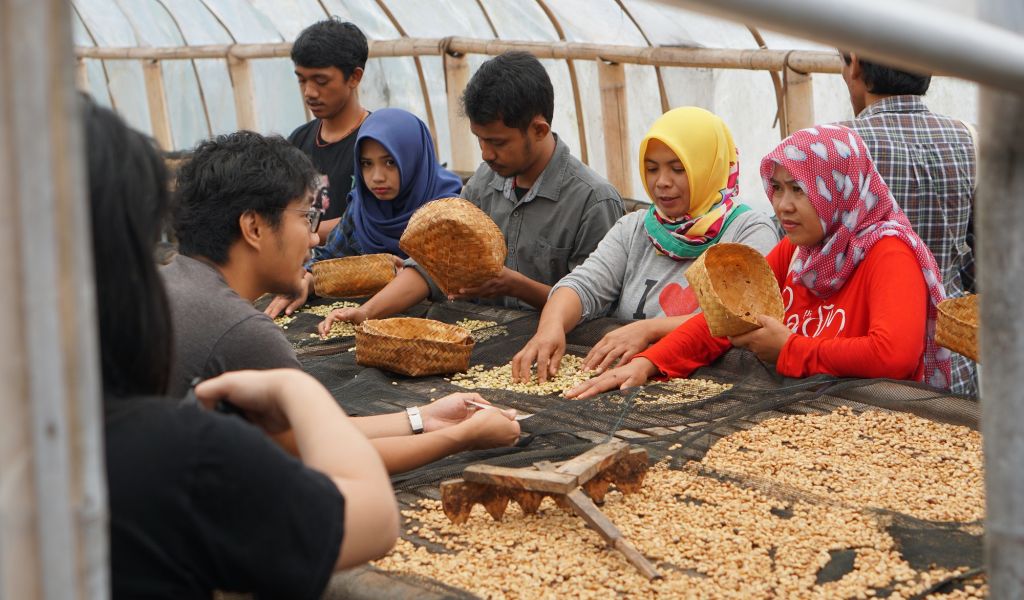 On April 26 – 28, 2018, for 3 days RECOFTC Indonesia facilitated a number of coffee farmers, NGO activists,, and local government representatives from South Sulawesi province in the Study Tour to the Klasik Beans Cooperative. This program is part of the Community Capacity Strengthening Program in the Development of Social Forestry Enterprises in FMU. This activity was carried out through the full support of RAFT (Responsible Asia Forestry and Trade) and in collaboration with the Jeneberang I and II FMUs and local partners (the Balang Institute and the Sulawesi Community Foundation (SCF)).

For 3 days, the participants learned and shared experiences about coffee plantation management, post-harvest processing, marketing, and cooperative management and collaboration between farmers and the government through Social Forestry program. Two days of study tour were conducted in Bandung District, precisely in the area of Gunung Puntang, and the last day was in Garut District. The two locations are two examples of the Klasik Beans operating area.

Klasik Beans is one of the coffee cooperatives that has the highest selling price in Indonesia. Klasik Beans is known as a coffee cooperative that upholds conservation value in their activities. Founded by a number of coffee activists, the Klasik Beans has now become a place of learning center for the world coffee activists, ranging from coffee farmers to processors, and marketers. One of the founders of the cooperative and also a coffee instructor is Mr. Purnomowidi Eko who had received the 2016 Change Agent Award from the Rainforest Alliance. This is what the Classic Beans became the destination for this study tour.

On the first day of the study tour, the participants were accompanied by instructors visiting an organic coffee farm in Gunung Puntang that was cultivated by a partner farmer of Klasik Beans, precisely in the Salawe Block which required 2 hours walking to get to this location. Together with the local farmers, participants, and instructors, discussion was about the importance of organic coffee farming and its benefits to farmers and the environment. Organic coffee has higher quality and price in the market, and is more environmentally friendly.

"Here, we don't use poisons," explained Megan, one of the instructors. Eko added, "Here, Megan used to use the term" poison "to refer to factory-made fertilizers (chemical fertilizers), chemical pesticides, and others, because these materials will eventually poison our farms. The need for fertilizers and pesticides can actually be obtained from the environment around us, from existing plants that can be used as a natural fertilizer or pesticide that is environmentally friendly. "

On Salawe Block which was once damaged by environmentally unfriendly agriculture, rehabilitation began through organic farming and local tree planting. Participants learned about how ot make simple terraces as part of the soil protection. Each  participant also participated in planting local trees in the area as part of paying off the debt of the carbon footprint used during the study tour.

"Here, Megan used to use the term" poison "to refer to factory-made fertilizers (chemical fertilizers), chemical pesticides, and others, because these materials will eventually poison our farms. The need for fertilizers and pesticides can actually be obtained from the environment around us, from existing plants that can be used as a natural fertilizer or pesticide that is environmentally friendly. "

On the second day, the participants learned about how to process good coffee. Post-harvest processing is the most important stage after harvesting red picks to ensure the quality of coffee harvested is maintained and not damaged. Learning started with how to sort coffee, stripping coffee, washing and fermentation, and drying. Then, it followed with the warehouse management, processing in the pulper, and sorting coffee.

A coffee farmer from Kahayya village of Bulukumba district named Ms. Nuraini said that what she already knows the basics of what are learned in Klasik Beans, but in practice it was sometimes difficult to do. Through this study tour, she  is able to see how to do good coffee post-harvest processing. One of them is about coffee drying process. In Kahayya Village, most farmers are still drying coffee on the roadside so the quality of the coffee produced is less than optimal. Coffee should be dried in a greenhouse.

"This is like in my village. I already know this theory, but it hasn't been done yet. By learning here I can know that this can be done with other farmers, for example, drying coffee in a green house can be done with mutual cooperation. So far, it is still being dried in the sun," said Ms. Nuraini.

Also on the second day, participants learned to test the taste of coffee through a technique called cupping. This quality test becomes important to know the characteristics of the coffee produced. Indonesia which is rich in coffee has a variety of coffees that have unique flavors from various regions. Coffee from Sulawesi has different flavors from Lampung, Aceh, West Java, and so on. The uniqueness of this coffee flavor is also one of the selling points for coffee on the market.

The 3rd day of study tour was conducted in Garut district, about 3 hours driving from Bandung. Participants visited a coffee farm which was also managed by a partner farmer of Klasik Beans in Leuweung Tiis (which means cold forest) of Garut district. Leuwung Tiis is a CBFM land managed by Klasik Beans. Leuweung Tiis was originally a type of volcanic soil and prone to fire. Since a few years ago, Klasik Beans and its farming partners began planting in Leuweung Tiis with coffee and local trees and also part of the government's reforestation program.

In this coffee garden, there was also a co-founder of the Klasik Beans Cooperative,Mr. Obet, who shared stories about the beginning of the formation of the Klasik Beans Cooperative. Also present there were representatives from Perhutani who told the history of CBFM in Leuweung Tiis. Here, we also discussed about Social Forestry and exchanged stories about social forestry in Bantaeng and Bulukumba, how the Social Forestry program should be a tool to improve the welfare of the communities around and within forest areas.

The last visit was held at the Sunda Hejo Coffee House, which is a coffee cafe and an outlet for Klasik Beans products. Additional lessons were also done for participants who were interested in learning a short technique for brewing coffee from the barista. A number of young coffee farmers were interested in this lesson session.  This was because they know how the coffee they plant will be enjoyed by the people. Also at the Sunda Hejo Coffee House, participants briefly discussed the coffee marketing strategies that Klasik Beans had done and what could be learned for the participants.

Hopes from the Study Tour

The 3 days study tour was closed with the impression of the participants, especially farmers, through a study tour to Klasik Beans. Mr. Lukman (21), who is a young farmer from Bulukumba expressed his gratitude and the lessons he could bring to his village. He wants to spread the knowledge gained from this study tour to his fellow farmers in his village. Likewise Mr. Ramli, who is also a figure of a young farmer from Bantaeng, wants to bring knowledge from Klasik Beans to his village to develop Daulu Coffee which is signature coffee of the Pattaneteang Village where he lives.

This study tour is an effort from The Center and the parties to improve the quality of coffee farming for coffee farmers in South Sulawesi, especially farmers who live around the forest area so that the welfare of farmers improved which also increases forest conservation. 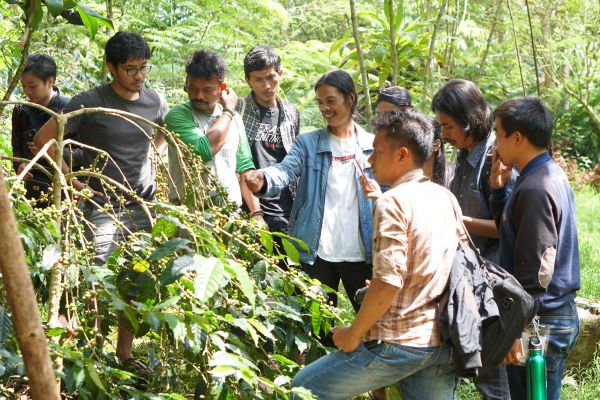 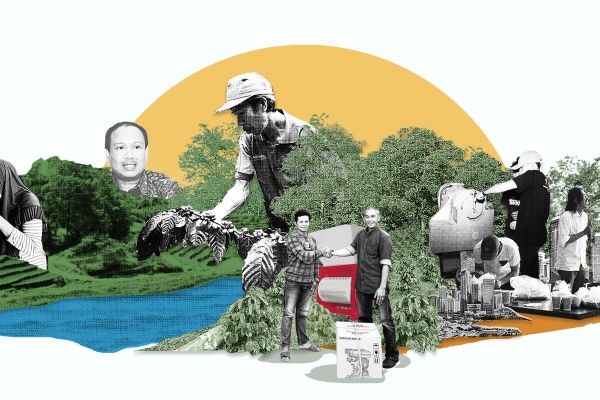 Smallholder farmers and local businesses work together to... 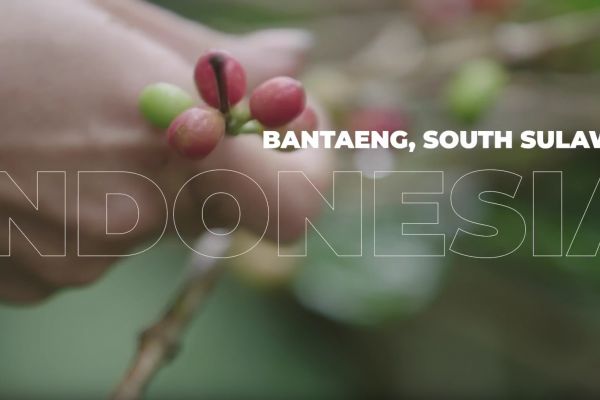 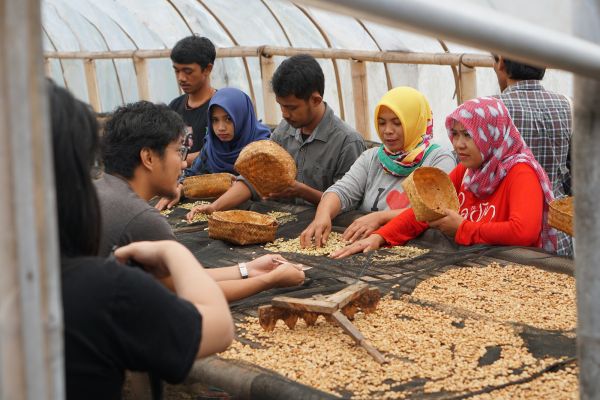 Learning Coffee, Cooperatives, and Social Forestry with the... 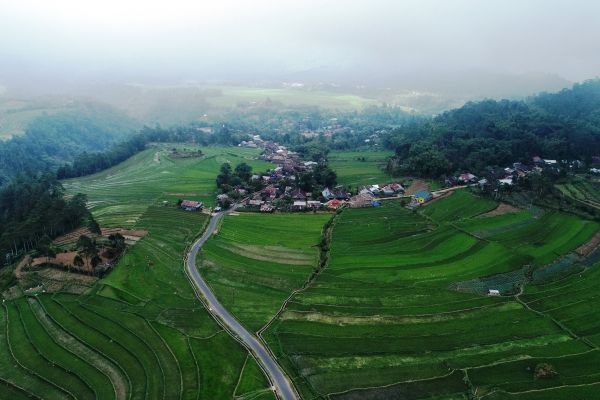 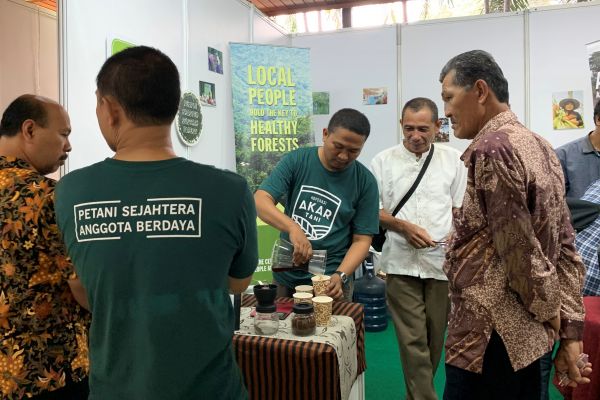