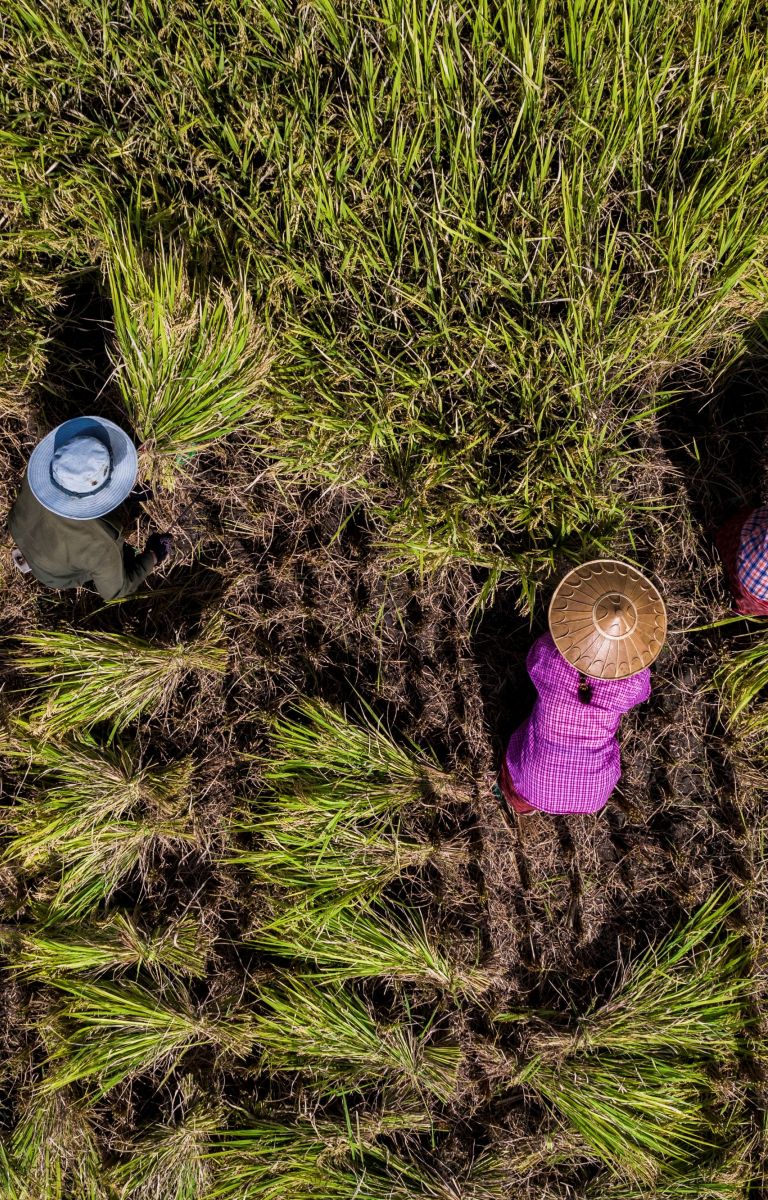 The 2008 food-price crisis led to economic and social turmoil across Asia. The crisis was a wake-up call for ASEAN and its Member States, which were also starting to recognise the threat climate change posed to food supplies. The following year, ASEAN Ministers of Agriculture and Forestry set out to do something about it when they approved the ASEAN Multisectoral Framework on Climate Change: Agriculture and Forestry towards Food Security.

The bigger picture
Forestry takes place in the vicinity of many other land uses such as agriculture, conservation, human settlements, roads, power generation and mining. Countries are increasingly taking a landscape approach to balance these various demands for land in ways that bring social, economic and environmental benefits. For example, Indonesia, Myanmar, Thailand and Viet Nam are exploring the Forest Landscape Restoration (FLR) approach, which strives to provide multiple benefits in areas where the area or quality of forests have declined. Social forestry fits well with these goals. At the same time, a landscape-level perspective is key to successful implementation of social forestry.

Their goal was to coordinate action to ensure that climate change adaption and mitigation efforts improve food security while conserving natural resources. For the ASSFC, this Framework provided an opportunity to show that social forestry is relevant to far more than just forestry.

Capistrano says the Multisectoral Framework is significant because it is rare for ASEAN initiatives to reach across sectors and the organisation’s social and economic pillars.

“Forces affecting social forestry emanate from outside the forest sector,” she says. “Without dialogue with agriculture, energy and mining, there can be little success because these forces are much bigger. By bringing in other sectors too, such rural development, and the environment, we can develop integrated solutions that overcome silos.”

Initially, the Multisectoral Framework existed only on paper. Then the ASFCC got involved, helping to organise meetings and providing background briefings for the ministers. The ASFCC also had input into a roadmap and framework for further action, linking climate change, food and nutritional security and the Sustainable Development Goals. Ministers agreed on that package in 2018. It is now a standing item on the agenda of all Working Groups that report to the ASEAN Ministers on Agriculture and Forestry.

Forestry is influenced by multiple sectors, including infrastructure and agriculture, as shown above in Inle Lake, Shan State, Myanmar © RECOFTC 2019

The voice of civil society

Another of the ASFCC’s successes is the way it engaged civil society in regional policy processes. The ASFCC achieved this in part through its implementing partner, the Non-Timber Forest Products-Exchange Programme, a network of more than 60 non-governmental and community organizations.

The ASFCC also supported participation by civil society at the national level. In Myanmar, for example, it helped the Forest Department to establish the Community Forestry National Working Group with members from various government agencies, as well as civil society organizations and academics. The Group contributed to legal reforms and developed guidelines for implementing social forestry. It helps to coordinate and create synergies across activities in the country, while ensuring policy makers are better informed.

“Participation is crucial,” says Capistrano. “It is the essence of what makes social forestry effective.”

The participatory nature of social forestry gives it potential to foster equitable benefit-sharing and balance competing interests. The goal and priorities have to reflect the realities of different stakeholders, and local people are the most critical but most often absent. Social forestry calls attention to these stakeholders.

Bringing people together is at the heart of ASFCC’s ethos, as well as its own design. Its implementing partners brought a variety of complementary skills and experiences to the partnership. Capistrano cites CIFOR’s policy research, ICRAF’s more technical research and RECOFTC’s strength in capacity building and institutional development.

“ICRAF brought agroforestry science and expertise into the ASFCC partnership,” says Delia Catacutan, ICRAF’s Regional Coordinator for Southeast Asia. “It raised the important roles of agroforestry in achieving the goals of social forestry in a changing climate. It provided the basis for actions through policy guidance to agroforestry development, capacity building and institutional strengthening.”

Meanwhile, the NTFP-EP brought a focus on non-timber forest products which are usually marginal in forest sector discussions but are important for communities. And SEARCA, meanwhile, brought broader agricultural experience, and managed a small grant mechanism to encourage countries to experiment before scaling up with their own resources.

“All of these different partners have their own credibility, networks and partners,” says Capistrano. “Together, they formed a web stretching from the very local scale in countries to the ministerial level within ASEAN. The power of the collective is greater than its parts.”

Governments need to continue investing in social forestry if they are to meet their national targets. Nghe An, Viet Nam © RECOFTC 2019

As ASFCC draws to a close, Capistrano is clear that governments need to take a greater interest in social forestry and its potential to address multiple challenges.

She says social forestry has to be mainstreamed. As climate change worsens, the already-vulnerable ASEAN countries will need to increase resilience, address poverty and contribute to global efforts to draw carbon out of the atmosphere. Social forestry can help with all three goals.

“The countries increasing forest cover are those with social forestry,” says Capistrano. “You can see it on satellite imagery.”

Only with the right conditions in place, she says, can social forestry meet its true potential to bring social, environmental and economic benefits and help countries address climate change. Among other things that means social forestry is supported by policies, supported by access to markets, and supported by levelling the playing field so it can compete with corporate plantations.

“All of that will need to happen,” she says. “For social forestry to play the kind of role it can under favourable conditions, governments will need to create those conditions and in large enough areas. The ball is in the court of Member States.”