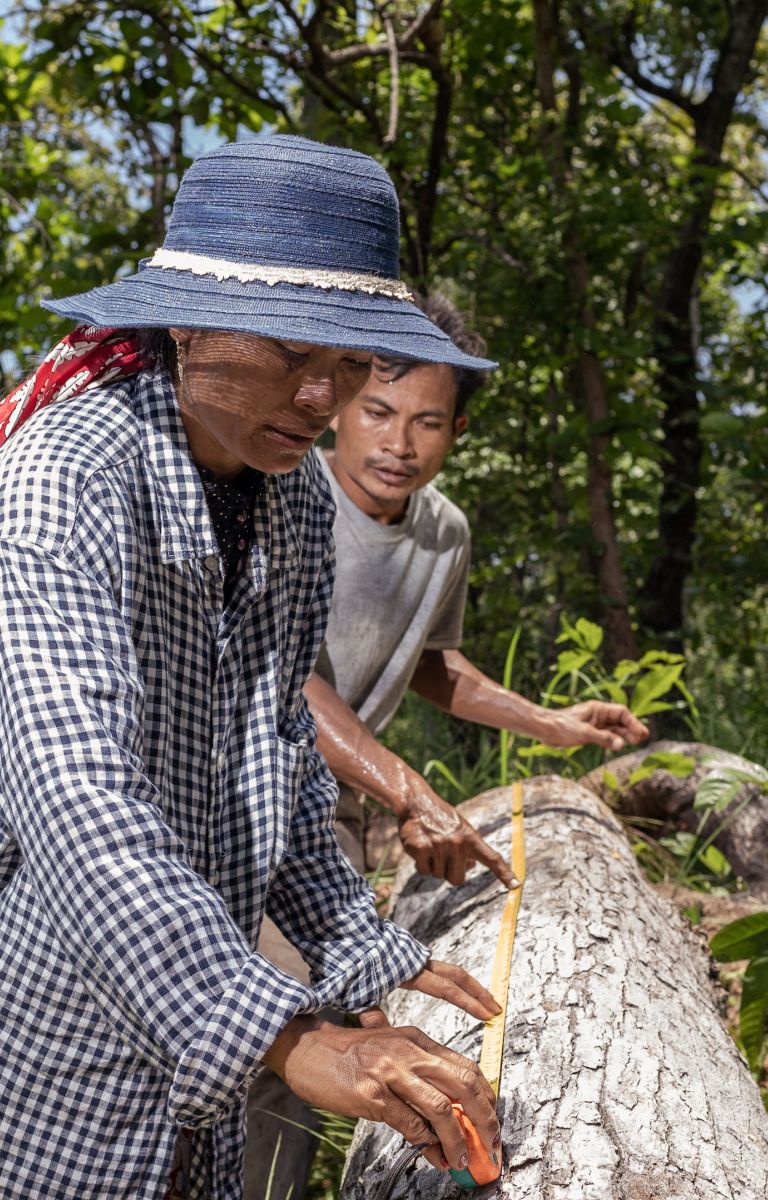 RECOFTC
The O Taneung community forest has become a laboratory for sustainable development through conservation.

The O Taneung community forest, a 613-acre stretch of shade and birdsong about 65 kilometres outside Kratie city, Cambodia, is a tranquil place where local people can manage the forest and harvest natural foods and medicines without fear of conflict.

That wasn’t always the case. On a recent afternoon, community forest chief Pao Kosal recounted the early days of the campaign to protect the forest, a time when nothing was guaranteed to the people who cared for the forest and relied on it for survival. As he spoke, he made a chopping motion with his hand to the back of his head, showing exactly where he was struck by illegal loggers who attacked him years ago, while he was on patrol.

“In the first days, the commune and authorities didn’t support our community,” Pao recalls. “But now, we’re not worried. The attacks and the threats, they don’t happen anymore.”

That is partly because local authorities have, in the years since the dramatic assault in the forest, embraced the forest community and the work villagers have done to protect the forest and build it into an economic asset with support from RECOFTC.

RECOFTC is one of a network of organizations helping to develop a new model of stewardship in the Kingdom. With help from the Swiss Agency for Development and Cooperation (SDC), a major advocate of community forestry in Cambodia, and the World Wide Fund for Nature (WWF), RECOFTC is advancing the second phase of the Partnership for Forestry and Fishery Communities (PaFF).

The partnership’s focus on innovative conservation is already bearing fruit for O Taneung community members. With seed funding from SDC, the villagers have developed a credit scheme that directly benefits them as well as the forest. This scheme is a community-managed alternative to microfinance. The community forest group is also pioneering a deadwood harvesting program that could provide a blueprint for sustainable timber, pole and firewood production from community forests nationwide.

According to villagers who gathered one afternoon in the forest to chat over fresh grilled honeycomb, a local delicacy, deadwood could one day be the most lucrative product from this forest. The community stands to make up to 70 percent more revenue from selling timber than for anything else, including wild honey, mushrooms and bamboo shoots. 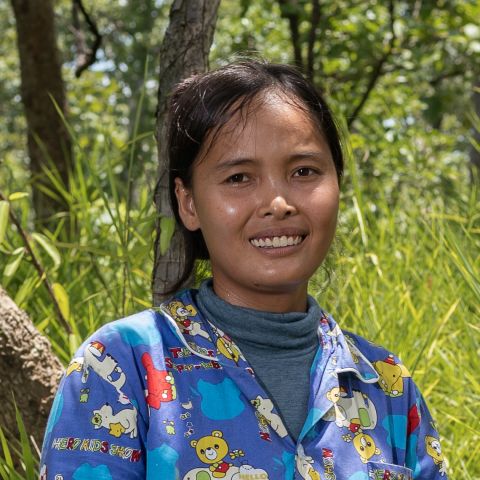 “If you don’t do anything with it, the deadwood will burn. Instead, we can sell it and make extra money to invest in our community forest.”

Ray Seakla was one of a group of more than 20 community forest members who took to the forest before a visit from Markus Buerli, the new head of the Cambodian office of SDC. Between her excursions to harvest natural foods, Ray shared her thoughts on the deadwood program. So far, she said it was seen as a win-win for sustainable forest management.

“If you don’t do anything with it, the deadwood will burn,” Ray says, pointing to the risk of wildfire fueled by dead trees and brush. “Instead, we can sell it and make extra money to invest in our community forest.”

Ray harvests wild foods and plants cucumbers in a small garden inside the community forest. She also joins the community in doing just about everything else from fishing in the small river that runs through the forest to conducting inventories of trees and patrolling the forest for illegal activity. 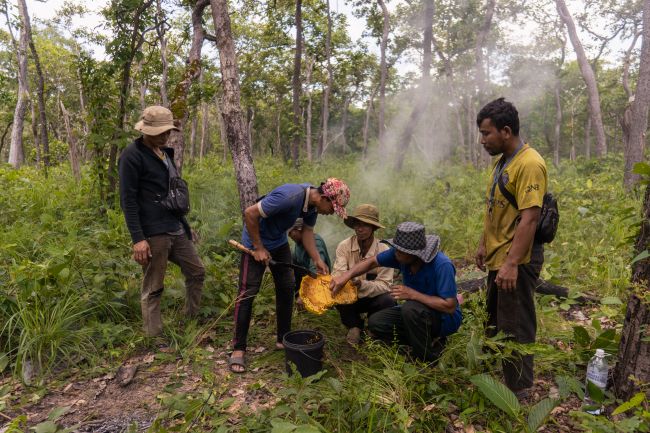 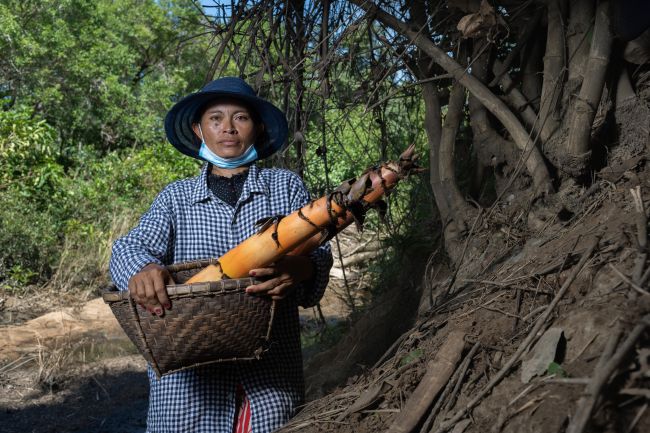 In 2012, the Cambodian Ministry of Agriculture Forestry and Fishery (MAFF) granted the village of O Taneung official status as a community forest. In 2015, the community received a 15-year land lease guaranteeing access to the public forest as long as it works toward achieving the goals of an official forest management plan. Today, the community forest group has 245 members who represent more than a third of the population of Kbal Damrey Commune of the Sambo District in Kratie Province.

Markus Buerli, director of SDC in Cambodia, visited the community in late August 2020 to hear directly from members about how the community forest group was evolving.

“From what I saw here and my direct conversations with the people of O Taneung, I can say that sustainable forest management is driven by local community effort,” Buerli says after his visit. “I’m impressed with their commitment. But besides just hard work, we can credit a lot of success to the strength of human resources and relationships, not to mention the central role of female leadership. We heard positive feedback about the individual work of people leading programs like the credit scheme, as well as those who are keeping up the bond between forest community members and local authorities such as the commune council.”

“Stakeholders should take these kinds of economic-minded strategies into consideration when coming up with plans to support community forestry,” says Buerli. “These kinds of capital strategies motivate forest communities to find novel ways to protect natural resources that become central to their livelihoods.”

Even before the community launched the new programs, its members were more than willing to spend their time protecting the forest. Besides collecting natural goods, the people of O Taneung plant, manage and patrol.

Although they can rely on the forest to provide sustenance, villagers here can be relatively cash-poor, with many relying on seasonal agricultural work in the economic land concessions around their forest. The district government is currently expanding a road that passes through the area where the community forest lies. And, while the new infrastructure provides villagers with greater access to the forest, Ray says it has done the same for uninvited guests.

“The road made things harder, with illegal logging and land grabbing,” she says. “But we’re still not concerned. There are many stakeholders involved now to protect the forest.”

Land is a precious commodity in Cambodia, where illegal land-grabbing is an unfortunate reality for communities like O Taneung. The potential for land theft tends to go up in places like this, where forests are disrupted by increasing numbers of infrastructure projects. Many consider undeveloped land as an unclaimed opportunity ripe for the taking.

Luckily, that kind of pressure from outside can be countered by committed allies. The members of the community forest at O Taneung believe they can count on a growing body of public officials, such as those on the local commune council, to help them secure their precious land.

Commune council representative, Tom Them, joined the community members ahead of the SDC visit and spent most of the day in the forest. In the afternoon, he told a small group gathered in a shady spot that the commune leadership was proud of the work being done by the community forestry group.

Such negotiations speak to the delicate balance in community forestry between protecting natural resources and finding sustainable ways to use them for the greater economic good. Besides the deadwood harvesting program, since 2018 O Taneung has also been making use of a community forest credit scheme launched with US$1,000 in seed funding from RECOFTC and the SDC.

Tuy Sophon, a longtime community forest member and chief of the credit scheme, said the fund has already expanded its credit pool to more than US$3,000 and now serves 35 families.

“As this develops, I hope everyone in the community can borrow in the future,” Tuy says. As of now, he explained, the loans have mostly been to fund agricultural projects outside the forest, such as small investments of seed, fertilizer and other materials used by the villagers.

The interest rates the recipients pay is a little higher than what they would find at a microfinance institution or bank, Tuy says, but the proceeds of these loans stay firmly in the community, where they are reinvested in the credit scheme and in forest management.

In the future, Ray Seakla and others hope the growing capital pool from the credit scheme, and the money made on interest, can fund more ambitious improvement projects such as the construction of a seedling nursery for reforestation, a firebreak to prevent the spread of forest fires and even renovated roads to allow them to more quickly get around the woods and respond to illegal actions there.

For those currently enrolled with the program, that community-building aspect helps make the scheme an attractive option, as does the trust extended to borrowers.

“We’ve had no issues with lack of payment, but there are sometimes late payments,” Tuy says. “But we are all neighbours here, so we do get paid back, even if it takes some extra days.”

That flexibility is part of the appeal of the program, which does not require collateral from those who take out loans. The application process is also simpler than those provided by microfinance institutions. And, while the program maintains an official structure to ensure accountability of the money, community members say they have a faster and more convenient experience borrowing from their neighbours than they would get from an outside institution.

With the money they are building with the new initiatives, Tuy and other community members say they have already been able to defray the costs of management while expanding their ambitions. Though their labour is still offered on a volunteer basis, community members like Thon Phanny can now use group funding to buy petrol, food and other supplies for forest patrols.

“The community forestry group is more active than it was before,” Thon says. “There is more patrolling, more money to do activities now.”

While Thon is pleased with the growth of the community-led initiatives, she wants to see even more coordination between O Taneung and the outside world, particularly with figures at the national level.

Community forest chief Pao Kosal has a similar feeling. Acknowledging the increasing security that has come through integration with the local and district authorities, Pao made an appeal for even deeper partnerships in the years ahead.

“Even though we have come a long way from starting with nothing, we still need support,” says Pao. “The community alone can’t do it all yet. But we’re going to climb up the mountain—we’re going to get to the top.”