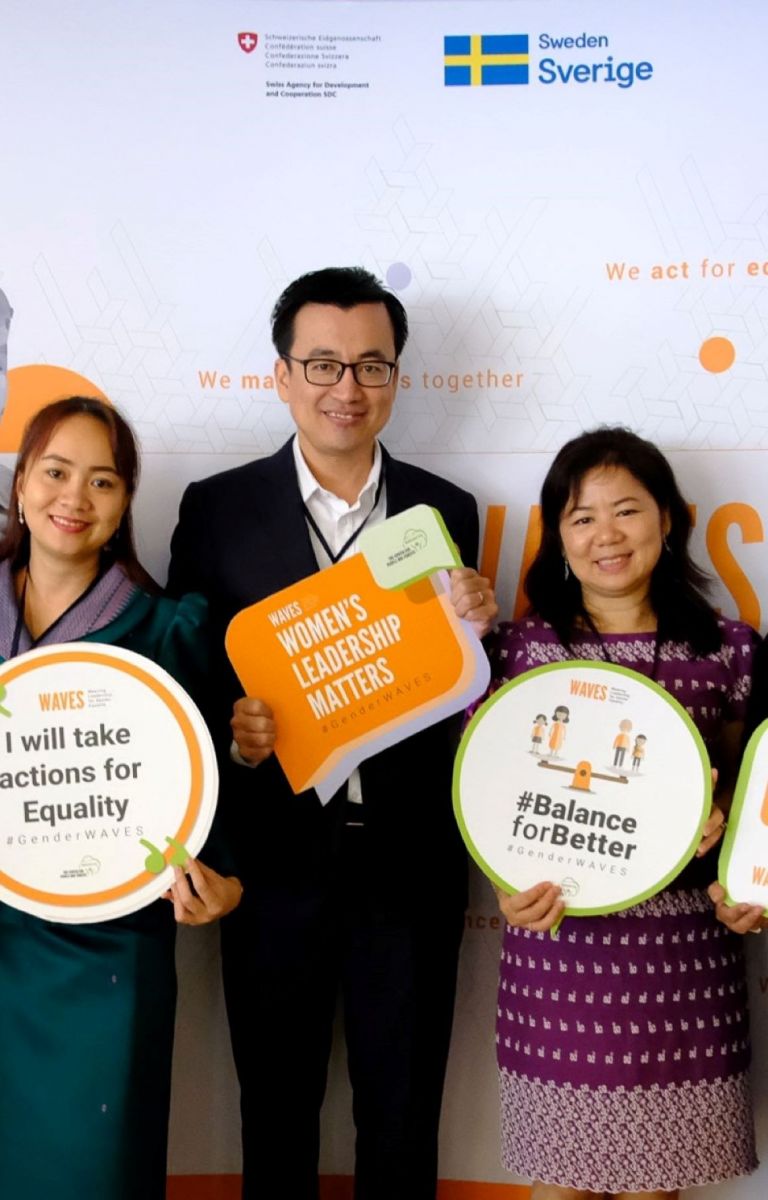 WAVES leaders are reviving and driving the gender agenda in the forestry sector, reminding their societies that the goal is inclusion and social justice.

When the Beijing Declaration and Platform for Action was agreed 25 years ago, the gender agenda it sparked was expected to open up economic sectors as well as leadership and education opportunities for marginalized groups, largely women and girls, but also men.

RECOFTC launched a program in 2019 to cultivate gender champions and deepen their influence and impact. The three-year Weaving Leadership for Gender Equality initiative, known as WAVES, has built a network of 31 gender leaders who are influencing gender equality in climate change, REDD+ and forestry, law enforcement, governance and trade policies and processes in seven Asian-Pacific countries.

“WAVES leaders are proving what can be done,” Giri says.

The leaders include academics, journalists, government officials and directors of civil society organizations from Cambodia, Indonesia, Lao PDR, Myanmar, Nepal, Thailand and Viet Nam. They are reviving and driving the gender agenda and reminding their societies that the goal is inclusion and social justice.

“We need to correct that with a paradigm shift that makes gender equality the core business of development cooperation everywhere, including forestry.” – Kalpana Giri

Through WAVES, leaders are applying the guiding call of the 2030 Agenda for Sustainable Development. They believe that women and men must access and benefit from the world’s resources fairly and equally and in ways that improve their well-being and that of their communities and the environment.

A female village chief in Cambodia grows a community forestry credit scheme into a self-generating source of income for the community and the protection of the forest, despite obstacles.

WAVES leader Novaty Dungga, a lecturer at Hasanuddin University in Indonesia, has integrated a gender lens into her curriculum.

“I’m changing the popular narrative about gender in my country so that more people will know that gender is not only about violence against women,” Dungga says. “It is also about providing equal opportunity to everyone in the community to enjoy the benefits of development in ways that are just and sustainable.”

According to UN Women, 39 percent of employed women are working in agriculture, forestry and fisheries globally, but only 14 percent of agricultural landholders are women (link). Policy changes needed to correct these injustices are slow because not enough women are moving into governing positions where they can effect change.

“My main goal is to make stakeholders understand that gender equality is the work of everyone, and that it will benefit everyone,” says The Chhun Hak, WAVES leader and director general at the Ministry of Women’s Affairs in Cambodia.