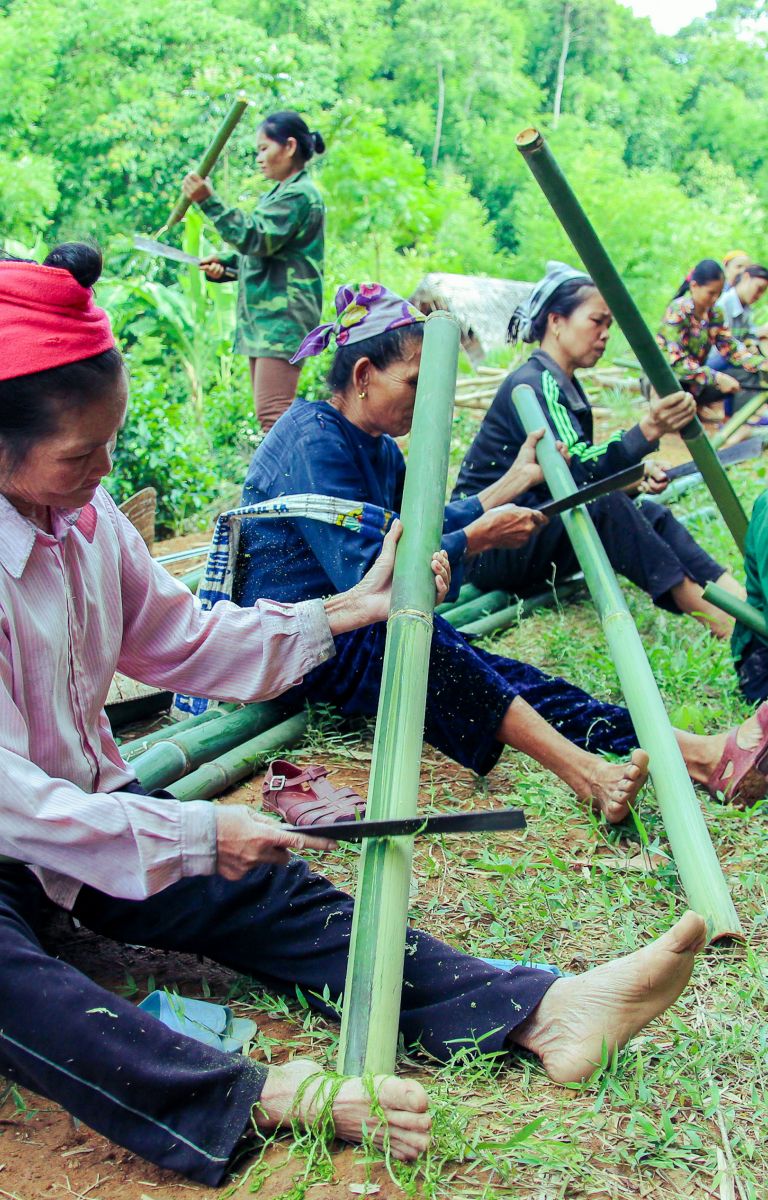 RECOFTC
Talk of the Forest
In Viet Nam’s Nghe An province, FLOURISH works with the local government and local businesses to help local communities and especially ethnic minorities restore and benefit from bamboo forests.

When Nong Thi Huong talks about what bamboo means to her and her ethnic Thai community in northern Viet Nam, she tells a tale of economic, ecological and personal transformation.

In her village, incomes have risen and people’s lives have improved—all because of new ways of managing, using and trading bamboo.

“Whenever I need money, I can harvest and sell it,” says Huong. Like many in her community, she calls her bamboo forest “a bank in the backyard”.

Yet just a few years ago, local bamboo forests were being depleted so fast they were at risk of disappearing entirely. Change is coming about through a forest landscape restoration initiative called FLOURISH.

The initiative is helping hundreds of villagers like Huong to take steps to restore bamboo forests, develop sustainable livelihoods and play a part in slowing climate change. By working with communities, local government and the private sector, it is showing how to achieve social, economic and environmental goals at the landscape scale.

Huong lives in Xet 1 village in Châu Thắng commune, Quy Chau district in Nghe An Province. For generations, people in Nghe An have relied on a species of bamboo known locally as lung (Bambusa longissima sp. nov). They use it as a material for making a range of items—from toothpicks to garden fences, baskets and lanterns. As well as harvesting lung bamboo for their own use, villagers also sell it. This is a major source of household incomes in the mountainous area of Nghe An where lung bamboo is found, accounting for 14.2 percent of the average annual total.

But by the mid-2010s, over-harvesting was devastating the resource on which so many people depended. This was true not only in Huong’s village but also across other villages where lung bamboo forests grow in Quy Chau and Que Phong districts of Nghe An province.

Huong says local community members lacked technical knowledge about sustainable management of their bamboo forests. “They tried to harvest lung as much as possible irrespective of its age and quality, and they did not leave any mother lung that could generate seedlings”, she says.

Huong says a lack of enforcement against illegal bamboo harvesters, and the community’s weak position with bamboo buyers, also contributed to the rapid depletion of local bamboo forests.

To test solutions to challenges such as these, RECOFTC’s FLOURISH initiative began working with Huong’s village and four others nearby in 2019.

With funding from the German government through the International Climate Initiative (IKI), RECOFTC partnered with the local government’s Nghe An Forest Fund and the International Bamboo and Rattan Organisation (INBAR) to help communities restore their bamboo forests and use them to secure their livelihoods sustainably.

The four-year project has so far trained hundreds of villagers on bamboo management, harvesting and primary processing techniques, and on a technique for propagating bamboo called ‘offset planting’, which can aid restoration efforts. This involves selecting a cluster of two or three bamboo culms from a clump, removing them along with their underground parts, and replanting them elsewhere where they will generate new bamboo culms.

Huong was among those trained. Along with 15 other community members, she has been practising lung propagation on a shared 0.23-hectare nursery plot. “The technique for propagating bamboo is so easy to learn and apply”, she says. “Our lung transplants have grown well. Their survival rate is about 90 percent.”

The initiative has supported smallholders in all five villages, 84 men and 37 women, to negotiate and sign partnership agreements with the Duc Phong handicraft company, based in Vinh City. Under these partnerships, the company commits to buy bamboo at agreed prices, guaranteeing sales for people with few other options for generating income.

The Duc Phong company uses the bamboo it buys to make lampshades and baskets that it exports to Europe. It is serving a growing international market for Viet Nam’s bamboo products that is now worth more than US$300 million a year. Exports of bamboo and rattan to the European Union, for example, grew by 12.3 percent in the year to September 2020, reaching US$13.4 million that month.

This trade with Europe, in particular, promotes sound management of bamboo forests thanks to sustainability provisions in the 2019 EU-Viet Nam Free Trade Agreement. This should help communities like Huong’s, which are restoring their lung bamboo forests, to participate in international supply chains.

“The partnership agreements aim to promote sustainable lung bamboo production and trade by strengthening collaboration between local communities and the Duc Phong company”, says Luong Van Phi, head of Ban village Lung Harvesting Farmer Group, Chau Thang commune. “As well as agreeing on the terms of business, both parties commit to working together to manage and protect lung bamboo forests so that they can be harvested sustainably.”

But for livelihoods to be truly sustainable, and for villagers to have incentives to restore their bamboo forests, they need secure rights to forest land.

Under the government’s forest land allocation process, villagers can apply for a ‘Red Book’, a 20- to 50-year title to forest land. Without a Red Book, a villager cannot legally plant and harvest bamboo. But the process of applying for one is not well known among remote communities and especially among ethnic minorities such as the Thai people in villages where RECOFTC is working.

To address this, the FLOURISH initiative has been training community members on forest mapping, boundary identification and how to apply for Red Books. By the end of 2020, the project helped 241 households in Que Phong district and Quy Chau district to successfully apply for Red Books, covering a total of more than 1,550 hectares.

“The local authority fines people who do not protect their forest land”, she says. “When we protect lung well, they can’t fine us or confiscate our land. We secure our rights to our land.”

“Before the project, there was a massive waste of resources”, Pham says. “Only 50 to 60 percent of the harvest was used in the production chain. Most of the waste occured when harvesting. After cutting bamboo, local people did not clear the remnants. This waste can sometimes cause forest fires in the dry season and fungal diseases that threaten the lung forest in the wet season. Because of over-harvesting, the lung forest could not regenerate quickly enough.”

“By successfully introducing the technique for propagating lung bamboo and raising awareness among local communities, the project has resulted in sustainable management of lung bamboo forests”, Pham says. “This will contribute to forest landscape restoration and conservation of soil and water resources. It will also help to reduce greenhouse gas emissions in the long term.”

Huong says that by restoring local lung bamboo forests, improving how they are managed, strengthening rights and developing partnerships with the private sector, the project has improved local people’s lives.

“The project helped my community conserve lung bamboo and sustain our livelihoods,” she says. “We now know how to harvest lung bamboo and then replant it. Over-harvesting of bamboo has been stopped and the rate of illegal bamboo harvesting has significantly dropped compared to what it was before the project. We have benefited from the partnership between community members and Duc Phong company, which buys all lung that we harvest at a stable price.”

She says average incomes from selling lung bamboo have doubled to 15 to 17 million Vietnamese dong per year after local communities learned and applied sustainable harvesting and pre-processing of Lung bamboo material.

“I can observe our lives becoming better”, says Huong. “We have enough money for our children’s education, gifts for our relatives and more food, including meat and milk. We have more time to do other part-time jobs.”

Huong also says the project has empowered her as a woman.

“Before participating in the project, I knew that women should have economic independence, yet I did not know how to gain it,” she says. “The training courses improved my awareness about women’s independence. They inspire me to establish my own business that can help my sisters.” 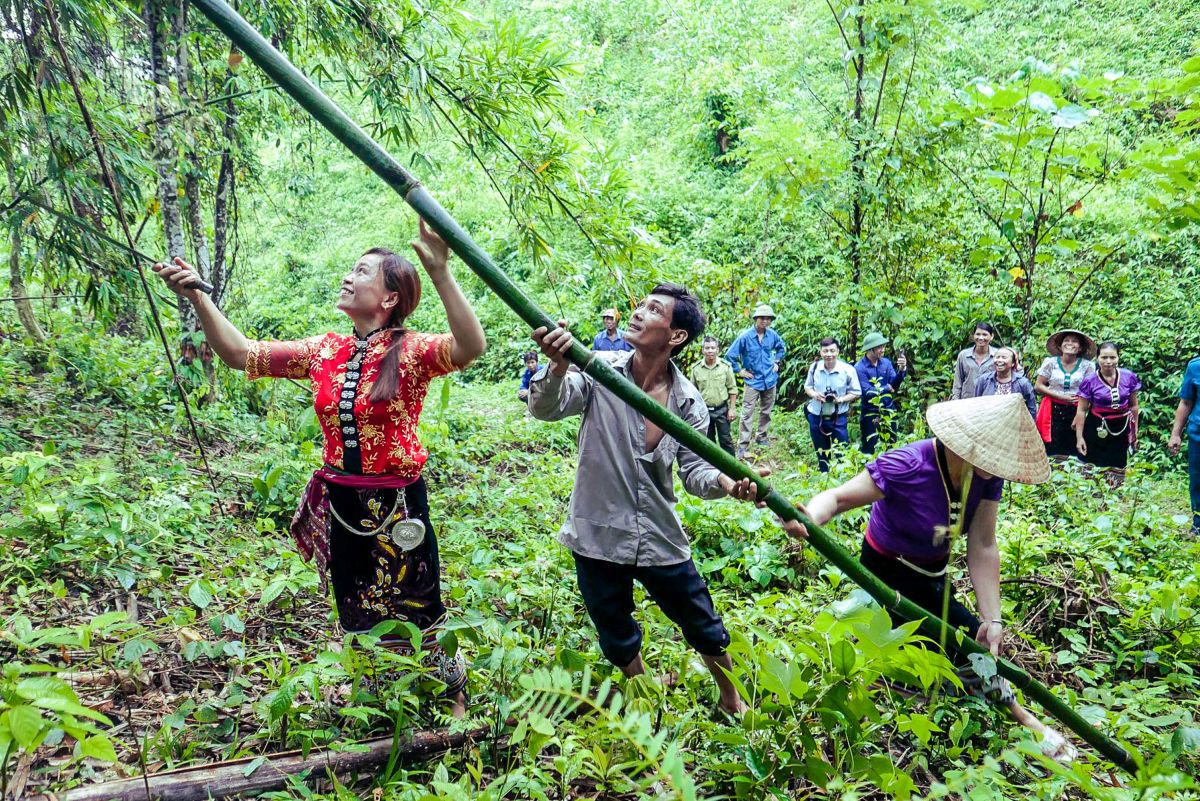 But Huong says more support is needed to meet the widespread interest in bamboo reforestation in her community.

“While the benefits are clear, many households cannot afford to do it,” she says. “They told me that they would definitely apply this method if they had enough financial support.”

She also says more people need to take part in training courses to understand the significance of lung bamboo restoration and be motivated to conserve it. Despite her concerns, Huong expects more households will receive grants to replant lung bamboo on their forest land.

“I feel optimistic about our future”, she says.

This story was produced with the financial support of the International Climate Initiative (IKI) of Germany’s Federal Ministry for the Environment, Nature Conservation and Nuclear Safety (BMU). Its content is the sole responsibility of RECOFTC and does not necessarily reflect the views of BMU. For more information on FLOURISH visit this page.