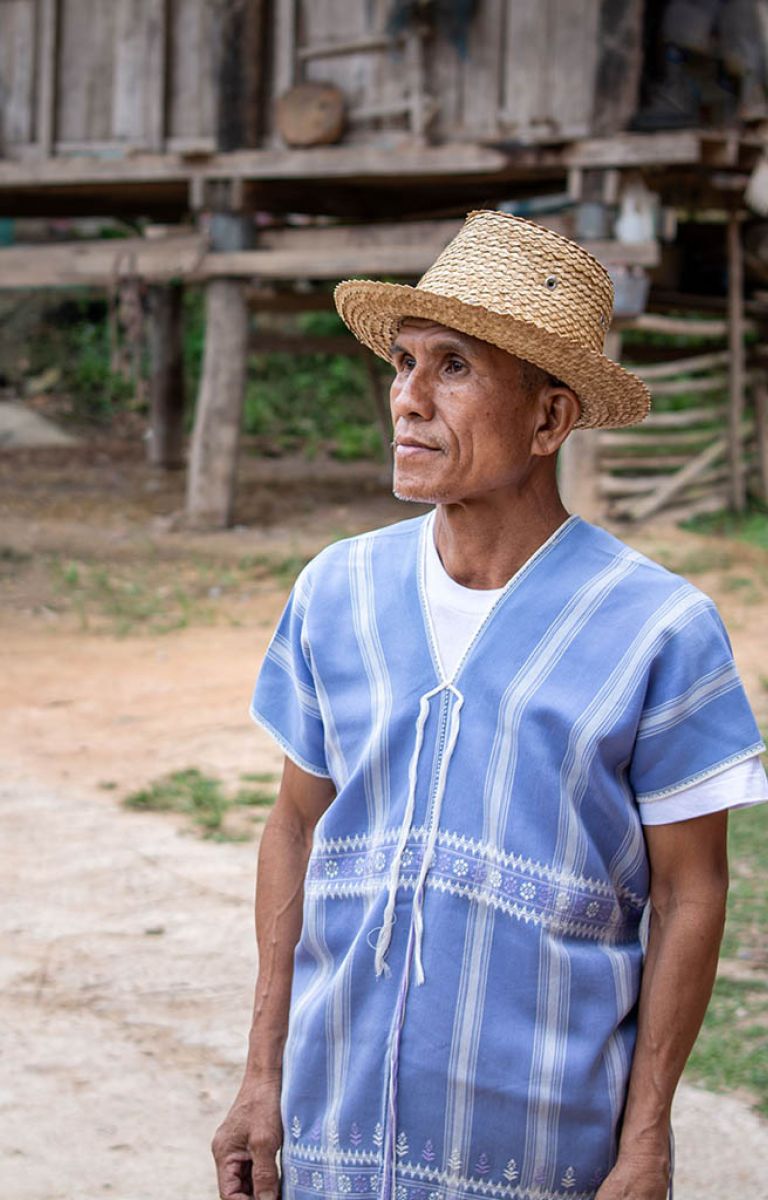 Jeffrey Williamson
A Karen community in northern Thailand has developed a sustainable ecotourism model in Doi Inthanon National Park that respects their rights and conserves the environment.

Tourists from around the world come to Baan Mae Klang Luang to hike the scenic trails, sample the local craft, coffee and cuisine, and meet the Karen people who take care of the land. Nestled in the stunning mountainous setting of Doi Inthanon, Thailand’s highest peak, Baan Mae Klang Luang is surrounded by brilliant green forests, lush rice terraces and verdant coffee fields.

But it wasn’t always this way.

The villagers of Baan Mae Klang Luang suffered through decades of conflict over discrimination, land-use rights and a clamp-down on the cultivation of a different, lucrative flower—the opium poppy.

The Pa Kaa Ka Yor people of Myanmar, ancestors of Baan Mae Klang Luang's residents, first migrated to modern-day Thailand in the late 1700s. They settled in the valleys of what is now known as Doi Inthanon National Park. They are members of a diverse, Sino-Tibetan people with a variety of cultures and languages that fall under the classification of Karen.

Approximately 412,000 Karen live in Thailand, predominantly in the North. Baan Mae Klang Luang is one of many Karen villages outside of Chiang Mai.

Village chief Phongthu Chueasutcharitphaiboon says that there is little written documentation about when people first moved to the area. Villagers use oral histories and the age of certain kinds of trees to determine the arrival of their ancestors. 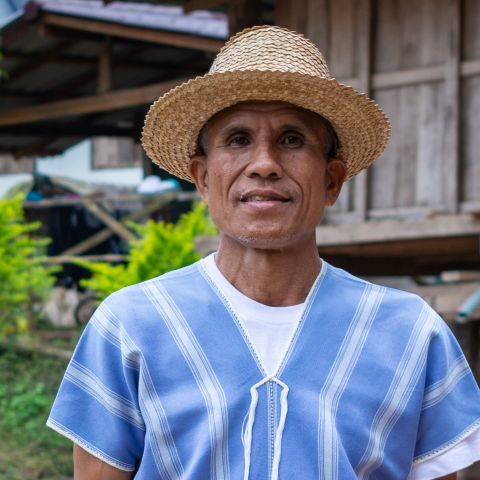 “We can calculate how long our ancestors have been here by observing the age of certain trees and discussing local histories. We believe that the community was first settled about a century ago.” − Phongthu Chueasutcharitphaiboon

Although they have established roots and communities in Thailand, the Karen people have often existed on the margins of society, unrecognized by the state. Many among the Karen live in an area that was formerly known as the Golden Triangle, infamous for the production of opium. The Thai government took sole authority over opium sales in the late 1870s. By the end of the 1950s, the Thai‐Myanmar‐Lao border area, where Baan Mae Klang Luang is situated, became an international hub for opium production and distribution. The villagers there were encouraged to grow opium extensively. Communist insurgents, as well as the government, profited from the trade.

After decades of international pressure, Thailand made opium illegal in 1958. However, the government didn’t have the resources to monitor northern ethnic groups, who continued to cultivate poppies.

In 1959, the Thai government began classifying Karen and other indigenous groups residing in Northern Thailand as Chao Khao, or hill tribes. The groups’ traditional method of rotational farming, also called swidden, was misperceived as unsustainable because it uses fire to clear vegetation.

During this time, those residing in the hills became known as swiddeners, opium growers and rebels. The rest of the country saw them as being responsible for environmental destruction, crime and threat. By the end of the 1960s, the negative connotations associated with hill tribes had reached a climax. Not only were their agricultural techniques perceived to be linked to deforestation, but the Thai state also regarded them as troublemakers in the context of the United States’ war with communism in Southeast Asia.

A changing way of life

Global trends and the high-level politics of the 1970s and 1980s were beginning to exert pressure on Thailand’s government to halt the production of opium in Northern Thailand.

As an elected official, Baan Mae Klang Luang village chief Phongthu had to represent the interests of his community while enforcing the laws of his government.

“But I knew that this friction would cause conflict over land-use because opium has a long history of being an important source of income here,” he says.

Opium trafficking provided a pretext for further state intervention in the area.

State-led infrastructure projects first began seeping into the surrounding hills of Chiang Mai in 1971. According to community leaders, the new roads provided an impetus for further development initiatives targeted at reducing the area’s financial dependence on opium.

Yet communities were often left out of discussions on how these development projects would affect them.

“The government did not provide them with any information at all. Even in 1971, many communities did not even know that producing opium had been illegal since 1958,” Thowa adds.

Thailand’s Royal Project initiated in 1969 by the late King Bhumibol Adulyadej of Thailand sought to rectify this issue by working with local communities to develop alternative livelihoods. Often hailed as a model for ending opium production by the United Nations, one of the biggest success stories of the Royal Project lies 230 kilometres northeast of Doi Inthanon on the border of Myanmar in Doi Tung. 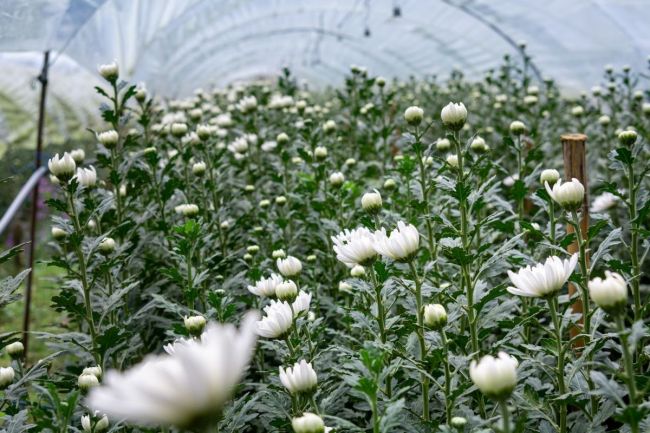 Flowers, as well as coffee and strawberries, were seen as an alternative to opium during the Royal Project. A member of the neighbouring Hmong village picks strawberries on the hills of Doi Inthanon. Baan Mae Klang Luang collaborates with other communities in the area to sustainably manage the land, including leasing their land for strawberry production. 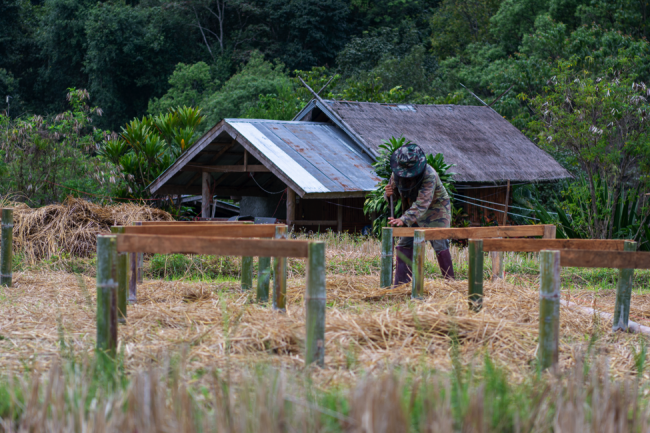 A member of Baan Mae Klang Luang dries rice after the harvest.

But according to village chief Phongthu certain farmers were reluctant to move away from the valued cash crop, and market opportunities were limited. Conflicts continued to arise as Phongthu enforced the new laws and regulations the state had adopted.

As a community leader, Phongthu stepped back to observe the situation. “What approaches are the villagers happy with?” he asked himself. “I then coordinated small group discussions with the community members to develop compromises, reach consent and create a way forward.”

This technique would prove to be critical for Phongthu and Baan Mae Klang Luang as land conflicts intensified in the 1990s and 2000s.

Approximately 1.2 million people living in 2,700 communities have experienced problems of legality and land ownership due to the designation of protected areas across Thailand, according to Prasert Trakansuphakon’s research on communal land management among Karen people.

For Baan Mae Klang Luang, problems of legality had long existed. But in 1993, the “dark green era” began, as Thowa of the Sustainable Development Foundation calls it. After decades of living near Doi Inthanon, the villagers of the community were declared to be inhabiting an illegal settlement within the boundaries of the newly created Doi Inthanon National Park. They were relocated downstream along the Mae Klang River despite the efforts of local organizations to secure the community’s customary rights.

“We did not want to fight or resist,” a local guide from the community said while taking participants of a youth leadership camp for a trek in Baan Mae Klang Luang’s forests. “We wanted harmony and to avoid violence.”

But conflict over land use continued to persist between the government, and Baan Mae Klang Luang and other communities.

“At that time, there were no meetings or negotiations between the park and the locals,” said Phongsak Wanalainiwet, a community member now in charge of Baan Mae Klang Luang’s community-based tourism initiative. The lack of communication is, as Wanalainiwet suggested, a reason why problems continued to increase throughout 1993.

Village chief Phongthu again initiated meetings between himself and those affected by the issues. In 1995, these meetings helped Phongthu establish the Watershed for Upland People Network to help mitigate conflict between communities over water use. It was the beginning of a new approach to landscape management.

In 1998, these discussions began to bear additional fruit. That same year some local communities were able to claim customary rights over the land following the passage of a Cabinet Resolution, a regulation issued by the Thai government attempting to resolve land use in forest areas on case-by-case basis (link in Thai).

The Sustainable Development Foundation helped Baan Mae Klang Luang with the process. “The information was powerful,” Thowa said. “The community could use the information to access their rights.”

“With so many tourists wandering around Doi Inthanon, we saw an opportunity to present our traditional clothes to others,” said Kamonwan Phongcharoenwan, the manager of a local weaving group that was set up under the village’s community-based tourism network.

The community-based tourism network now includes 14 members who collectively manage 50 private houses and 19 homestays. A weaving group and a coffee cooperative distribute traditional products while local guides who live in the village present the landscape’s beautiful forests and waterfalls to domestic and foreign tourists.

The network’s benefit-sharing model provides additional resources for the community’s environment fund, which produces a sustainable flow of financing for conservation.

But challenges continue to exist. Even though the community has secured customary rights to the land, new laws governing national parks may overwrite the villager’s access to the forest and undermine their administrative rights.

Baan Mae Klang Luang still provides a model for future conservation efforts. The successful leadership displayed by village chief Phongthu and the collaboration between the community members, government agencies and local organizations speaks against current trends in conservation that are focused on pushing local communities to the margins.

Instead, Baan Mae Klang Luang’s community-based tourism has provided the villagers with an opportunity to discuss their landscape’s own contested history, decide what approaches are best suited to interact with nature and envision new models of landscape management.

“The conflict turned into collaboration,” said Thowa. “If you look around at the landscape, this is one positive outcome of our painful history.” 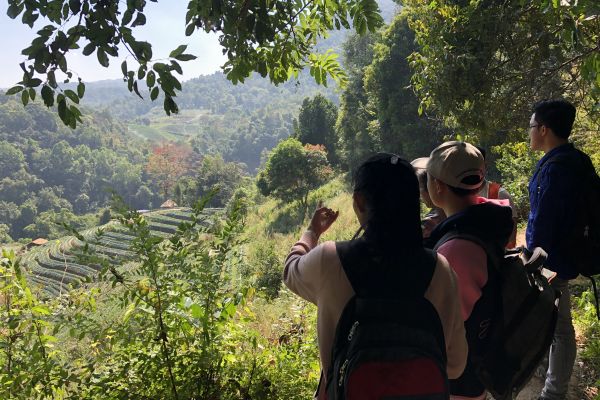